Life on the farm

Farming in real-life is a tough gig. Waking up at the crack of dawn, tilling soil (at least there are machines now that make that job easier), watering the crops, and then harvesting the resultant fruits of your labour. Farmers often face harsh weather effects such as drought and, floods and must overcome these and even pests before their yields are ready. However, farming games usually provide for something more relaxing. Plant your crops, keep them watered and well fed, and then sit back and watch the fruits of your virtual labour grow.

In Wylde Flowers, young Tara, however, decides to head to her grandmother's small town to help her on her farm. In the small coastal village of Fairhaven, the residents seem to know all the happenings and welcome Tara. And as well as helping her grandmother Hazel, Tara gets to interact with all the lovely residents of the small village. They are quite welcoming, and as Tara introduces herself to the many residents, players will slowly be given tasks to aid them as well as introduce Tara to the various locations within Fairhaven.

But of course, one of the main goals is to help Hazel run the farm. For some reason it has been fallen into disrepair and Tara must start from scratch, slowly collecting new materials to construct farming equipment and planting seeds to grow new crops. Starting with just a few seeds and some water from the nearby well, Tara will begin her farming life. As players complete each task, she will learn new skills, many of which can only be learnt from chatting with the locals.

The locals are a font of knowledge and chatting with them will both increase Tara's acceptance within the community and the knowledge held by them. Each of the citizens are fully voiced and have their own personalities. There is little doubt that players will have a connection with at least one of the individuals, with such a diverse group located in Fairhaven.

It is not long into the game though, that we learn that Hazel has a secret…she is part of the local coven of witches. And of course, you - as Tara – will decide to follow on the family tradition. Once accepted into the coven, Tara will learn spells and potions that can help her through the day. Between the witchcraft and the day-to-day tasks, there always feels like there is something new to discover in Fairhaven.

The game plays out in a version of real-time with day and night cycles. Shops operate during certain hours and some only on particular days, so players must plan their day around those availabilities. Citizens go about their business in a semi-regular pattern, so you’re likely to know where each of them is at any given time during the week, unless something has happened to upset the cycle. But generally, it is your interaction that has caused this anyway.

Tara also has an energy meter that players must keep an eye on during the course of the day. Each task she completes will reduce her energy but grabbing something to eat or resting in her bed at the end of the day will replenish her energy. For the most part, the day and night cycles help keep the energy bar in check. But as Tara begins her supernatural journey, the nights become a chance to work on potions and spells that will help her in her journey, and as a result players may need to decide between sleep and learning new skills.

Freedom around the town

Players are free to talk to whoever they choose and can complete tasks in just about any order, giving the game an open world feel, despite the relatively small map. Wylde Flowers has a simplicity that allows gamers of all ages to play and has a visual style that would appeal to most. The bright cartoon visuals are akin to a more realistic Dora the Explorer, whilst the diverse characters are equally adorable, each with their own personality. Wylde Flowers starts out as a farming simulation along the lines of Animal Crossing but ends up being more of a life sim that encourages exploration and communication...oh, and witchcraft.

Wonderfully diverse characters, plenty to do

Maybe too simple in a game sense for some players 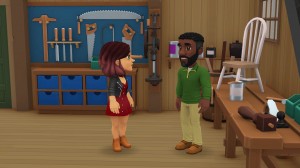 IGEA celebrates the reinstatement of the Australian Interactive Games Fund

Better to fall on your sword than play this game.