Place all items in the overhead compartment

I do like air travel (well, I did prior to the current pandemic) as it often leads to the chance to visit somewhere different and have new experiences. And although the airline food isn’t generally the best, I do wait for the helpful flight attendant to wheel out their little trollies of food and refreshments down the narrow aisles. Shakes on a Plane places players in the role of the aforementioned flight crew, serving food and beverages similarly to games such as Overcooked. Players select one of four character and must prepare and serve a variety of meals and drinks to those onboard the flights.

The game does come with a little story about a race of aliens looking for humans and their cooking skills, in order to win the universal version of MasterChef. Being that airline food is often regarded as being bland and unpalatable, it is somewhat ironic that the game takes place in the confines of an aeroplane. But in any event, the story is somewhat secondary to the gameplay.

Each level is set on a different plane, with varying seat configurations and kitchen galley set-ups. Like Overcooked, the levels (which are indicated as flights in the game) start off with the passengers ordering simple combinations of meals and beverages, but as teams work through the game, orders become more varied, seat arrangements become spread and hazards are more prevalent. Players must complete each passenger request within a limited time by preparing and then serving the meal or drink, and then collect any rubbish from the customer once finished. Some levels even have teams matching passengers and bags and paradropping them out a chute in the middle of the aircraft.

Place your tray table in the upright position

I mentioned that teams work through the game, but the game can be played single-player or with up to four players locally. The single player game requires taking control of two characters and switching between them as you attempt to meet the guest's requests, whilst multiplayer has players taking a single role of one of the four playable characters. The four characters each perform the same duties, but each has one particular skill that can be used to aid in completing their task of serving passengers. An alien character can activate his Speed ability, enabling him to perform tasks quicker. A witch-like character has the ability to scare passengers back to their seats, the pilot captain can throw objects, and a robotic character can transform into a protective block, preventing them from being incapacitated by the many dangers during the flights.

Although each of the settings is supposed to indicated Economy Class passengers, the settings appear more like those in the first class, with social distancing amongst the customers. However, like actual planes the walkways are quite narrow providing for a challenge when customers decide to go wandering. These wandering guests can get in your way, abscond with unprotected meals and can just be a plain nuisance when they’re not in their seats chomping down on their requested meals and drinks.

But it is not just the wandering passengers that can delay the serving of orders. Serving trolleys can slide when the plane tilts from side to side and getting in its way will cause players to be mowed down by the runaway trolley and temporarily disabling them. Turbulence too, can be an issue with characters falling down if they aren’t seated when the seatbelt warning bell chimes. Many of the levels contain conveyor belts to assist in moving ingredients to the galley, but in one level, a hole through the floor at the end of a conveyor belt means that the food drops out of the plane. Characters too, can fall out of they’re not careful.

Visually, Shakes on a Plane does a great job. Most of the cartoon styled settings are well laid out, making it easy to discern the different sections of the plane. Customer requests are displayed via an icon and a coloured countdown timer. The various meals and drinks are easily distinguished from each other, making the life of the flight crew that much simpler. Certain ingredients for drinks can often be hidden behind fixed objects when they’re on the floor, particularly if the plane has tilted during the flight.

It is a fun game to play, especially as a couch co-op, but it is a game not without issues. It can often be difficult to place objects (particularly when mixing fruit drinks) exactly where you want them, especially when you’re in a hurry. There is an indicator of where you’re placing an object, but it can be a little touchy. The same goes for when you’re near two passengers – a slightly incorrect movement can mean a player will pick up a passenger rather than collecting rubbish from a nearby passenger. The difficulty level for single-player game is also a tad too high, especially when compared to the multiplayer game.

That said, Shakes on a Plane is still enjoyable to play in single-player, but will be enjoyed more with a group of three or four. Working as a team and gaining the maximum three stars on each flight is highly rewarding. The simple controls, cute visuals, and upbeat music (that gets faster as the flight ends) make it a game that can be enjoyed by a family or with a group of friends together on the couch. The levels are varied enough – via the meals, seating arrangements and mission types – to keep the game fresh as gamers progress through the flights. And while we’re all in various forms of coronavirus lockdowns, this may be as close to air travel as we’ll get for the time being.

Tough to play as a single player 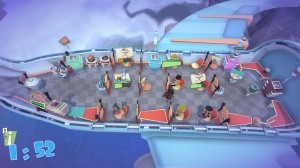 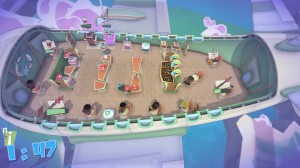 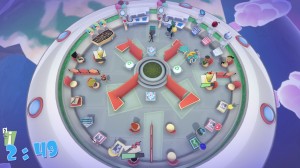 Give Me Liberty or Give Me Death